The State of Alternative Lending in Canada 2018 Study

When they’re in need of a loan, a majority of Canadians now look to online lenders as a viable alternative to traditional financial institutions, according to the State of Alternative Lending in Canada 2018 study conducted by online comparison service Smarter Loans.

The research has confirmed that the industry has seen a lot more interest from consumers in Canada over the past few years, but as it continues to expand there are a number of key issues that still need to be addressed.

Of the 1,160 Canadians surveyed about the loan products they have recently received, only 29% sought funding from a traditional financial institution, such as a bank. At the same time interest in alternative loans have been trending upwards since 2013 with 24% of respondents indicating that they sought their first loan with an alternative lender in 2018. Overall, nearly 54% of respondents submitted their first application with a non-traditional lender within the past three years. 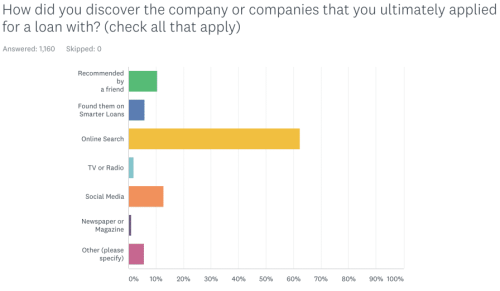 The appetite for alternative lending products has led Canadians on a search for information about the options that are available to them. Of those surveyed 46% researched between three and five companies before applying for a loan, and another 25% looked into six or more options. 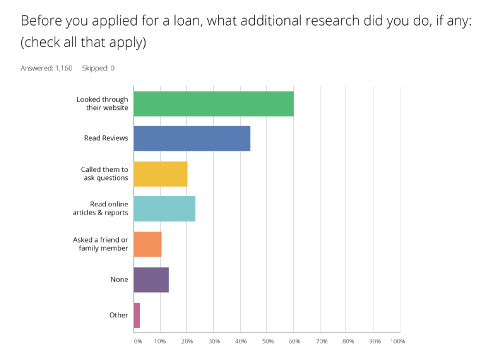 Their research is primarily taking place online, with 62% turning to search engines to find a lender, 60% checking the vendor’s website before applying, and 44% reading online reviews. The majority of respondents, 55%, spent between one and five hours researching a lender before applying, with 71.5% indicating that they ultimately felt they had enough information to make an informed decision.

Where Canadians are satisfied with alternative lenders

Generally speaking, Canadians get what they’re looking for when they turn to an alternative lender, with 75% of those that applied online getting the loan they were looking for, and 85% confirming satisfaction with the service they received. 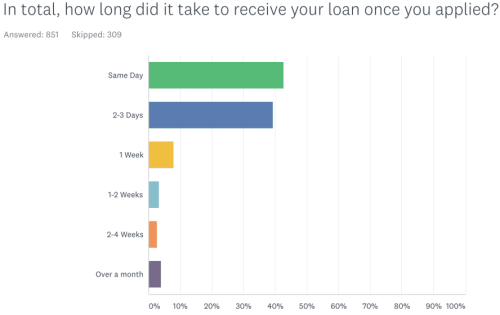 Promises of same-day or quick approval in marketing materials seem to be fulfilled by providers, with 42.7% of applicants receiving funds the same day they applied, and 82% of respondents receiving their loan within three. Overall, 68% of those surveyed either “agreed” or “strongly agreed” that the application process was fast and easy.

Where there remains room for improvement

While the alternative lending industry has come a long way in a short period of time there are still areas where consumers are hoping to see some improvements.

While nearly 61% of respondents were satisfied with the loan application process, the remainder had some concerns. The primary causes of frustration were confusion, poor customer service or denied applications. 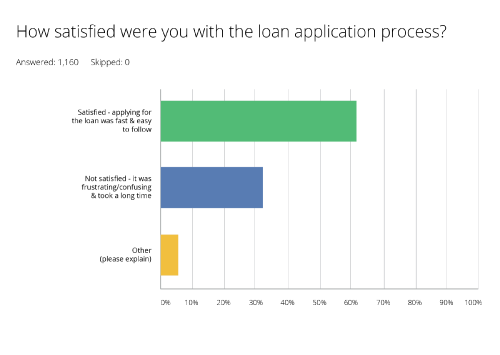 Overall, the top three most important factors for consumers when choosing their provider was interest rates and terms of the loan, followed by customer service and support and speed. 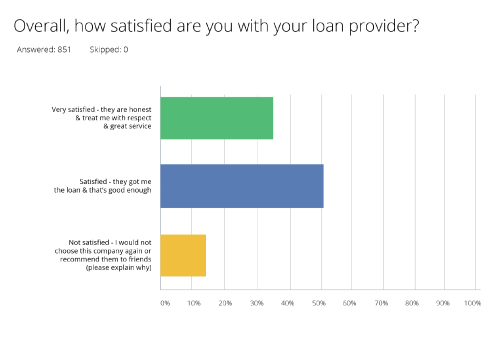 At the same time Canadians aren’t entirely ready to trust alternative lenders, with 57% suggesting that borrowing money from an online lender doesn’t feel entirely safe, and another 45% suggesting that lenders aren’t transparent enough about their terms and fees. 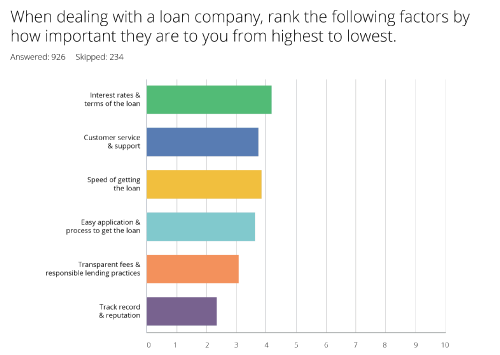 Overall, respondents rated the Canadian alternative lending industry 3.2 out of a possible 5 stars. When asked to provide one piece of advice to Canada’s top lending companies for improving their services, the top five responses were:

Despite the tremendous growth the industry has seen in recent years Canadians remain skeptical. According to the survey results many of those that have had a positive experience with an online lender still aren’t convinced they’ve found a viable alternative to traditional financial institutions.

Overall, 43% of respondents would consider going back to a bank after dealing with an alternative lender, and 38% remain unsure. At the same time, borrowers in the youngest demographic, which comprises the industry’s future customers, are most skeptical about borrowing money online, with 70% not believing that it is safe and scam free.

It should come as no surprise that Canadians’ relationship with alternative lenders differs significantly by age. What is surprising, however, is how the sentiments of the oldest demographic surveyed, those 65+, most closely echoed that of the youngest, those aged 18 to 24. The study revealed the two to be the most skeptical about borrowing money online, with about 70% of each age group disagreeing with the statement that it is safe and scam free. 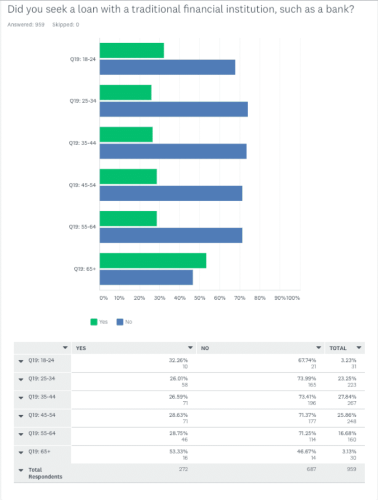 Those aged 18 to 24 also did the most research, with 42% researching 10 or more options, more than twice and in some cases more than three times the proportion of other age brackets. Those 65 and over were also more likely to put more than the average amount of time into their search, with 43% dedicating more than 3 hours, compared with an average of 36% across all age groups.

Those in the 35 to 44 year old group were most likely to spend less than an hour searching for an alternative lender. They were also most likely to say their loan was fast and easy (36%), and the least likely to be denied (only 21.5% were denied).

On the other hand those aged 18 to 24 were most likely to struggle with the loan process, with more than 50% indicating that it was difficult, despite high success rates, as only 22.5% were denied.

Those aged 45 to 54 were most likely to say they did not get approved for a loan, with nearly 31% being rejected.

The research also suggests that the older you are, the less likely you are to get same-day approval. Of those aged 18 to 24, two-thirds were approved the same day, compared with about half of respondents aged 25 to 34, about 41% of those 35 to 55 and 36% of those 55 and over.

When it comes to their experience with alternative lenders, not all geographies in Canada are treated the same. Though some elements were consistent countrywide the speed, level of service and amount of information available differed depending on where the respondent was based. Geography also determined how likely a borrower is to consult a traditional financial institution over an alternative lender, and how likely they are to return to their previous provider.

Of all Canadian provinces and territories Manitobans were most likely to approach a bank first, with 48% seeking traditional financing, compared with 29% of the country as a whole. Furthermore, None of the respondents in Prince Edward Island and the Yukon bothered approaching a traditional financial institution, nor did 75% of those in Alberta and Ontario.

Manitobans were also most likely to explore just one or two options before applying, with 42% limiting their search to just a couple of providers, compared with 25% of the general population.

Despite the limited scope of their search those in Manitoba were most likely to spend 10 or more hours doing research (20%) following by Nova Scotians (18%) and Quebecers (18%).

The highest proportion of early adopters for the alternative lending industry can be found in Prince Edward Island, where 28.5% of respondents had considered an alternative lender in 2011 or earlier, compared with the national average of 19%. 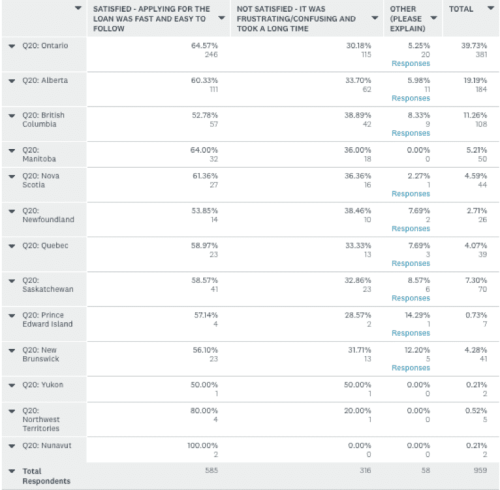 The most satisfied customers were those based in Saskatchewan and Nova Scotia, where 91% indicated that they were satisfied or very satisfied with their provider. The highest proportion of “very satisfied” customers, however, was in Quebec, where 55.5% of respondents gave their providers top marks, followed by PEI and Ontario, where 40% were “very satisfied.” Quebec was also home to the smoothest and easiest loan process, according to respondents. 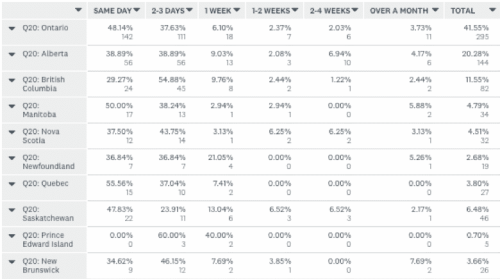 Canadians were most likely to receive funds the day they submit their application in Quebec, where 55.5% got same-day funding, followed by half of respondents in Manitoba and 48% in both Saskatchewan and Ontario. On the flip side, you’re most likely to have to wait for more than a month if you’re based in New Brunswick, where 7.7% waited more than 30 days to receive funds, followed by 7.7% of those in Manitoba and 6% of customers in Newfoundland. 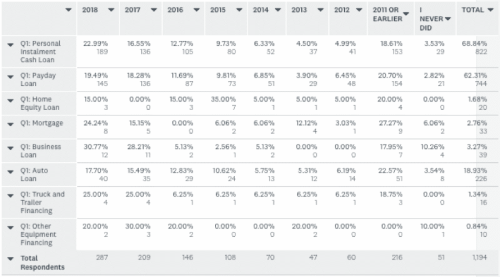 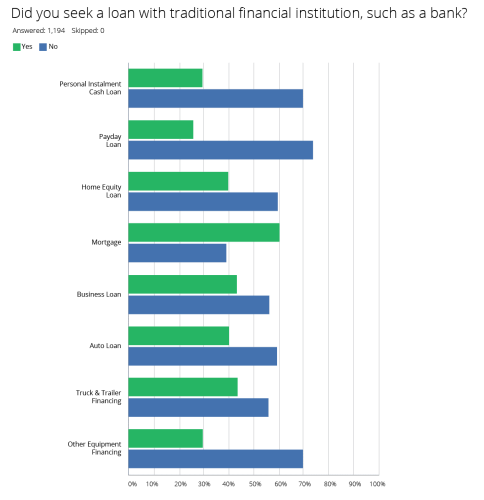 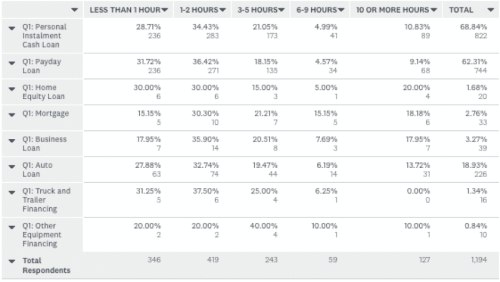 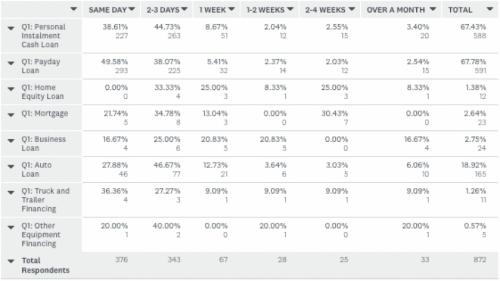 Payday Loans were most likely to be available same day, with half receiving funds the day they applied, compared with 39% of personal installment loan seekers, 36% of truck and trailer financing seekers and 28% of auto loan seekers. About one third of home equity loans took more than two weeks to process, as well as about 30% of mortgage applications. About 20% of those seeking truck and trailer or other equipment financing also had to wait for more than two weeks for approval. Home equity loans and business loans were the only loan types that were more likely to require more than three days to process than not. All other loan types were likely to be made available within three days.

Those pursuing home equity loans and equipment financing were least satisfied with their providers, with about 40% suggesting they would not return or recommend them to others. Personal installment and payday loan providers received the most praise from their customers, with more than a third saying they were “very satisfied” and another 52% indicating they were “satisfied” with the service they received.

The priorities of customers also varied depending on the type of loan they were pursuing. Home equity loan seekers, for example, were more interested in interest rates and terms than those seeking other loan types, while customer service and support was of highest priority to those seeking a business loan. Home equity, mortgage and auto loan recipients were the most concerned with the speed of receiving the loan, and customers of truck and trailer loan products were more concerned with the ease of the application process than other loan seekers.

Approximately 56% of those who applied for an auto loan or truck and trailer loan said they would go back to a traditional financial institution in the future, compared with the average of 43% across all loan types. Payday loan recipients are the least likely to go back to traditional institutions, which is being considered by only 20%.

Payday loan seekers rated the industry highest, giving it 3.25 stars out of a possible 5, while truck and trailer financing seekers gave the lowest scores, averaging 2.64 out of 5. The overall average rating for all loan types was 3.2.

In November of 2018 Smarter.Loans conducted a study of 1,179 of its users based across Canada about their experience with alternative lending providers over the previous 12 months. Participants were asked a total of 23 questions using the SurveyMonkey online polling platform, including multiple choice, ranking, and select all that apply questions.