Trends in the Alternative Mortgage Sector

You’ve heard it all before: the Canadian housing market is an ever-expanding bubble, and banks are increasingly unable to meet the needs of the average borrower. With the Liberal party promising to build, preserve, or repair 1.4 million homes in the next four years, now is an opportune time for alternative lenders to educate homeowners and future-homeowners about the virtues of alternative providers.

This starts with the numbers. There are approximately 300 active alternative lenders in Canada, responsible for between 13 and 14 billion dollars in outstanding mortgages. That’s an increase of multiple billions from just a few years prior. According to a new report released by the Canada Mortgage and Housing Corporation (CMHC), one fifth of new mortgages in 2020 were handed out by non-bank lenders. Recent broker lender market share figures show that alternative lenders Home Trust Company and Equitable Bank together held more than 13% of broker market share. Further, Mortgage Finance Companies (MFCs) hold 20% of the insured mortgage space and credit unions stand at 12%.

In recent years, the federal government has enacted new mortgage rules, one of which is a mandatory “stress-test” conducted by the Office of the Superintendent of Financial Institutions Canada (OSFI). In response to these and other new regulations, the big banks have reduced amortizations and decreased the size of mortgage loans. In addition, there are now stricter limits on the percentage a client can refinance under terms with the big banks. All this has made alternative lenders a more attractive option. 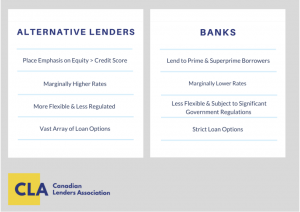 Interest rates are low, and uninsured new mortgage credit has seen a 20% growth in volume. These trends mean alternative lenders in the mortgage space can take on new segments of the market.

In a report by Statistics Canada, the value of residential mortgage loans extended by non-bank lenders grew by 25.4% in the second quarter of 2019. This includes both alternative and private lenders, but still demonstrates that the market share for alternative lenders is growing.

During the COVID-19 pandemic, mortgage debt as a share of disposable income ballooned, and showed no sign of stopping in Q1 2021. While this is mainly driven by the deadlines of scheduled payments, “more consumer savings and the growth in disposable income have contributed to the ability of Canadians to make the payments on time,” says Tania Bourassa-Ochoa, Senior Specialist of Housing Research at CMHC. 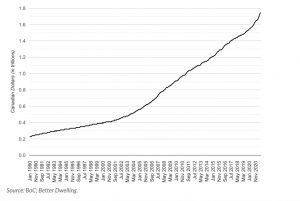 Gone are the days in which the majority of homeowners have stellar credit and a steady source of income. Canadian mortgage debt reached $1.75 trillion in July 2021, up 0.9% ($16.2 billion) from a month before. Compared to a year before, this is an increase of 9.6% ($153.1 billion). It is thus becoming more and more common to see a less-than-perfect credit score and tighter budgets from borrowers. Neither of these factors, however, should deter lenders from extending a mortgage. Even though the progressively rarer “perfect candidates” will have no trouble securing approval from a big bank, the bulk of borrowers may find that trickier.

While some think that alternative lenders are a monolith (i.e all borrowers will get the same rate and lender fee, regardless of the lender they choose), this is not the reality. Rates can vary depending on a number of factors. As depicted in knnct’s analytics below, there is a wide array of interest rates and lender fees across a variety of alternative lending transactions. 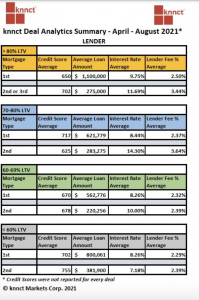 Alternative mortgage lenders not only step into the space to meet the demand for a mortgage, but can also offer a better deal at customized rates. This can come through expanded debt-service ratios, for example, some as high as 50%. Additionally, alternative lenders may accept forms of income a traditional lender would reject, such as from tips, commission or spousal contributory income. This propensity to accept a wider array of payments makes them more attractive providers than incumbent banks.

The alternative mortgage sector in Canada houses a number of elite players:

Perch has designed an analytics-driven digital program for users to get affordable mortgages in record time. Now more than ever, borrowers using Perch’s digital software feel inclined to choose an alternative mortgage option over traditional loans. Founder and CEO of Perch, Alex Leduc says, “67% of our (recent) deals went to alternative lenders. Some of the core factors that influenced this were faster approvals, more flexible policies (especially for those that are self-employed) and lower rates that help offset the effect of a larger mortgage due to higher home prices.”

knnct is another innovative platform that connects sellers with potential buyers. According to Chuck Allen, CEO of knnct, the company “makes the process of completing an alternative loan transaction faster and easier with its automated, cloud-based two-way marketplace platform that uses AI to instantly and accurately match and connect mortgage loan deals with those alternative lenders by matching borrowing needs to each lender’s specific lending criteria.” knnct.com aspires to be the preferred destination for online mortgage connections with more lenders, more properties listed for mortgages, and more successful mortgage deals than any other mortgage marketplace.

As demonstrated above, now is the time for alternative lenders to continue expanding their market share of the Canadian mortgage sector—not just for their bottom lines, but in the interest of more positive outcomes for consumers.