Gone are the days when venture debt was a specialty product. Today, debt markets are wide open, and it’s a tremendous opportunity for tech-focused companies. This type of lending,  often referred to as  “technology lending,” can turbo boost start-ups and set them up for accelerated growth—all the while keeping their equity intact.

New companies can become overwhelmed with where and when to start looking for funding. In certain regards, Canada is a more competitive debt market than the U.S. for tech companies in the mid-market range, because we do not have a Silicon Valley venture capital community to the same degree. In its place, Canada has a wide range of traditional institutions and fintechs that service the start-up community at every stage of their development.

Although VC funds took a hit during the pandemic in 2020, Q1 2021 was the highest on record for Canadian venture capital with $2.7 billion invested. Clearly, the spigot is open again, particularly for mid-sized companies in the e-commerce or digital transaction space. This type of tech lending generates high-yield investments for its backers, and reduces dilution as businesses grow. 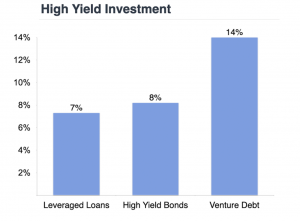 Providers For All Stages

Deciding who to partner with and when to partner depends on the size of the company and its stage of growth. Of course, start-ups have to consider their other backers, what they’re willing to pay, and where they are in the development cycle of their product. The larger Canadian banks have already made a big splash in the tech lending space—RBC recently launched RBCx, its innovation banking group that provides capital to early-stage startups at the Series A or pre-revenue stage; CIBC plans to double the staff of its innovation-banking unit in the next year. Often, more traditional backers such as these can offer a stable partnership by providing bank accounts and credit cards. They mainly view technology lending as backing institutional investors for a series A or series B round.

For an IPO or M&A, it may be intimidating to go to a big institutional lender. While banks can give a low rate facility, their deals might come with more strings attached. Lenders that offer mid-level pricing—such as BDC, for example—can be more expensive, but are generally able to deploy more capital, at higher levels of risk, to get companies accelerated. Then there are companies such as TIMIA Capital, that can do higher end deals with a minimal list of covenants, which are the loan terms that typically monitor a company’s financial performance. Some covenants for debt deals include maintaining a certain minimal level of working capital, or prohibiting them from using company funds for acquisitions.

On the ‘covenant-lite’ side of things, Garron Helman, CEO at Venbridge says “We very rarely get involved in our portfolio businesses, especially on the bridge financing side. We just want to be there to support the companies, and if they have any questions we’re happy to help.”

When choosing the right partner, a company has to consider its other backers, what it’s willing to pay and its stage of development.

Companies that take pride in being “debt free” are missing a huge opportunity to scale. According to Karanjit Bhugra of Echelon Wealth Partners, “if you’re not accessing debt capital whenever you can, it’s almost an irresponsible use of capital structure.” Tech start-ups are increasingly structuring finance deals entirely through debt, or paired with a limited equity exchange.

The question then becomes, of all the companies accessing debt capital, what makes a solid investment?

If companies are losing money, it doesn’t necessarily mean they’re a bad investment. It just means lenders should take a careful look at their other solid supportive sources of capital, and use their underlying assets as a main underwriting criteria.

Tech lending might seem like it’s a competitive niche, but there’s vast potential for partnerships between lenders. Brenda Slauko of BDC described the space as a “small, collaborative ecosystem,” in which different groups exist to serve different clients. BDC does not have operating lines of credit, so they need an RBC partnership to offer this, for example.

Start-ups should seek out investors who specialize in their needs. For example, Clearco— which has now raised over $681 million with an almost $2 billion valuation—offers revenue-based capital mainly to startups in the mobile apps, e-commerce and Saas markets.   Furthermore, on the investor-side of things, if a client wants a high dollar amount but has a risky profile, it might be mutually beneficial to refer them out to a different lender. For Canadian start-ups, the good news is, there are a lot of funding options available.

Over the next five years, more partnerships are likely to take place. Automation will also grow as a central part of the lending machine. “The number one reason a business chooses to work with a lender is speed. The shorter the time to make an offer, the higher the likelihood that the business will take your capital. For this reason, lenders that use technology to underwrite loans will have a significant advantage over those that don’t,” stated Derek Manuge, CEO of Corl.

Faster transaction speeds translate to overall better client experience. Fintechs involved in tech lending will likely continue to partner with data aggregators to drive their efficiency and improve credit monitoring. Moreover, “lenders will need to find new ways to differentiate themselves from the herd” by offering “additional incentives and perks, or [will] begin to specialize within a particular market niche to stand out amongst their peers,” according to Manuge.

At the beginning of the pandemic, some industry forecasters expected an overall devaluation of most companies. This didn’t ultimately occur, and the tech lending space has only continued to heat up in Canada. Tony Barkett, Managing Director of RBCx told the CLA, “There’s a lot of debt available and a lot of equity available. And it’s only going to get better going forward.”